David Ben-Ariel, author of Beyond Babylon: Europe's Rise and Fall 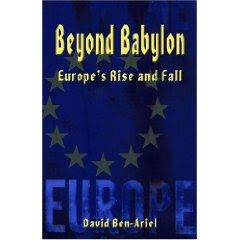 Beyond Babylon: Europe's Rise and Fall
by David Ben-Ariel
Mr. Ben-Ariel clearly has a God-given love for the Jews and the nation of Israel. His Israeli lawyer has stated that David's "future is linked with that of the Jews," and Gershon Salomon, chairman of the Temple Mount Faithful says, "God has some special task" for him. His sacred bond with the land and people of Israel has been strengthened over the years by his service as a volunteer on eight kibbutzim (collective farms) throughout the Holy Land, including during Operation Desert Storm. As a firm believer in the Israelite roots and responsibilities of the Anglo-Saxons and Northwestern European peoples, David works towards the ultimate reconciliation and restoration of Joseph with Judah. As a student of biblical prophecy, he is alarmed about Germany and the Vatican's increasing control of the European continent, remodeling it after the Holy Roman Empire. As the outspoken author of Beyond Babylon: Europe's Rise and Fall, he is determined to do all he can to help wake up the world to the clear and present danger Germany poses to world peace, with a special emphasis on the Middle East.

Feel free to buy it or read Beyond Babylon online for FREE!

Beyond Babylon: Europe's Rise and Fall
Posted by David Ben-Ariel at 5:16 PM