Have you fallen for SUNday? 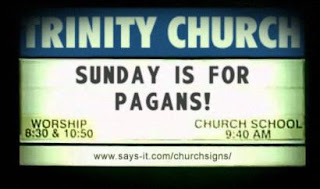 When you're out and about, notice all the signs inviting you to SUNday services, offering you a welcome this SUNday, but none saying "SUNday is for pagans - we've repented and now keep the Sabbath" or "Never on a Sunday! Jesus kept the Sabbath and so do we!"

Either the ministers of those professing Christian churches are ignorant of the Scriptures and history (that only sanction the seventh day Sabbath) or they're just plain dishonest with themselves and their poor flock (that have been robbed of the plain truth).

There's no excuse for Sunday! Jesus, his disciples - the apostles - and the entire early Church of God composed of converted Jews, Israelites and Gentiles kept the seventh day Sabbath! The original faith once delivered to Jerusalem (that included the observance of the seventh day Sabbath) became corrupted by Gentilizers, Romanizers, false converts who misled folks to keep Sunday, cleverly keeping both the Sabbath and Sunday at first until they gained enough power and influence to oppose the biblical Sabbath for their traditional Sunday.

Question your minister if he's a Sunday keeper and ask your friends why folks are keeping Sunday - the first day of the week - when the Sabbath is the seventh day. Most have never thought about it, sheeple to the slaughter, but now God is bringing it to the attention of many and expects us to repent of keeping Sunday and start keeping the Sabbath that is holy to Him.

"There remains therefore a rest [keeping of the Sabbath] for the people of God." - Hebrews 4:10

"Truly, these times of ignorance God overlooked, but now commands all men everywhere to repent." - Acts 17:30

Which day is the Christian Sabbath?

Roman Catholic and Protestant Confessions about Sunday
The vast majority of Christian churches today teach the observance of Sunday, the first day of the week, as a time for rest and worship. Yet it is generally known and freely admitted that the early Christians observed the seventh day as the Sabbath. How did this change come about?

Remember the Sabbath
Did you ever stop to think why Christians keep Sunday? Did they get it from the Bible? Is there a clear-cut command that says, "Thou shalt keep Sunday?" Why did Jesus worship on Saturday? Was it only because He was a good Jew? Or does it go beyond that?